On April 15th and 16th 1989 in Edinburgh the Wandering Dragons Chess Club staged the biggest match in the club's short history, as Chris Donkin reports.

Although the result of the match was something of a disappointment, the staging of the fixture was a great experience for everyone at the club. From Mark Orr down to wee Margaret Laurie - who was last seen locked in a passionate embrace with International Master Miklos Orso. Below is a diary of events.

See also the flyer produced at the time to advertise the match which, amongst other gems, includes several notable games by participants in the match annotated by Steve Gowland and a poem by Derek Poots.

For the members of the organising committee this was D-day. What we didn't realise was that D stood for Disaster!! For a week preceding the event we had been trying to find a free mini bus to use to ferry the Hungarians to and from their lodgings in Penicuik. This culminated in an appeal being broadcast on Radio Forth - no joy. So on Thursday four member's cars arrived at the airport to meet the Honved party. Things started to go wrong when Chris Hampton announced "The car park is too far away - I'll bring my car round!". That was the last that was seen of him. No problem we thought - we still have three cars. Then the inevitable happened. Paul Hampton's car wouldn't start. So you can imagine the scene. The professional chess players of the Honved club of Budapest have been on Scottish soil for five minutes. Grandmaster Sax and two others have been shown into Paul's car. The bonnet is up - the jump leads are out!! After about 15 minutes of unsuccessful mechanical tinkering, our stalwart member Jannic Konarski decides to add insult to injury by suggesting that the car is rocked back and forward. Eventually a taxi took the unfortunate Hungarians to Penicuik.

Fortunately the rest of the day went fairly smoothly and after a good meal at the Queen Street Oyster Bar in Edinburgh, the Hungarian party were in a better frame of mind.

This was to be the Hungarians' sight-seeing day. First however we had the "Pose for Photos for the Press" spot. After breakfast the photographer from the Observer arrived at the guest house in Penicuik to take some photos of the Honved and Dragons players practicing together. This rather interesting scenario saw Mark take on Sax, Pete Szalapaj take on Joszef Horvath and Jannic (who wasn't even playing in the match) take on Grandmaster Pinter. The photographer took many pictures of the lads from Budapest but for reasons best known to themselves the Observer (much to Jannic's delight) decided to print a photo of the three Dragons. For the record Jannic essayed the French Defence and claims that when the game was abandoned after 20 moves he stood clearly better.

The Honved players began their sightseeing tour at 11 and their guide was another of our stalwarts - Neil Clapperton. Sax had made a specific request to see Hopetoun House and his personal chauffeur (my Dad!) took him to see this and other places of interest while the rest of the party headed off down the Royal Mile with Big Neil. In truth the Hungarians sacked Neil at about 11.30 so that they could explore for themselves the pubs and electrical shops of Edinburgh.

This of course was the day of round one of the match. The result of which was as follows:

So, as you can see we were hoovered. However it should be pointed out that Dave Wallace was winning at one stage and Tony Dempsey clearly stood better - for a while. Perhaps 4½-1½ would have been a fairer reflection of the day's events. The best game of the day was the one which saw Pinter use the Marshall Attack to great effect against Craig Thomson.

On Saturday evening we took the Hungarians out to dinner. It was a great night - 18 Dragons and the 10 Budapestians. After the meal Craig introduced his girlfriend (Hilda Marshall) to his opponent. Pinter nearly ended himself. "Surely", he claimed, "you should be used to the Marshall Attack by now!". As the drink flowed a drunken Pete Szalapaj told Joszef Pinter "You are the best Grandmaster I have ever met". The modest Pinter was having none of it. "I think", he replied, "maybe I am the only Grandmaster you have ever met". We all enjoyed the company of the Honved players and they all enjoyed the Scottish beer.

Round two of the match and a very similar scoreline.

Well done Graham Morrison! Again though, with a little luck, we may have picked up one or two more points. Paul Hampton was doing well for a while and Mark Orr seemed to emerge standing better from the opening against the great Sax but perhaps it was just an illusion. Pinter's queen sacrifice against Craig Thompson is entertaining.

On Sunday night we entertained the Hungarians at the St James Oyster Bar and early on Monday morning the Hungarians caught an early flight to London en route to Budapest.

As you can probably guess my remit was simply (!) to organise the match and from a purely organisational point of view I am fairly pleased with the way things went. I must however admit to being disappointed with the score. We have always been arrogant enough to think that we can give anyone a good match. Although the final score does us no favours the vast gulf in ability between the teams leaves a lasting impression. The Honved team were good chess players and good bar room companions. Messrs Ruip, Orso and Pinter in particular knew how to knock back the ale. Finally I would like to thank everyone who made this match possible. The Cafe Royal Oyster Bar who provided 20 free meals, The Eastfield Guest House in Penicuik who gave us a discount of £150, The Edinburgh and Lothians Chess Association who donated £200 and Scotbyte Computeres who donated £50. The members of the club who donated so generously and who helped out at the match. Particular thanks are due here to Jannic Konarski, Neil Clapperton, my wife Anne, Maurice Kelly, Charlie Stewart, Pete Szalapaj, Paul Hampton, Garry Sanderson, Chris Mackay, Billy Porter, The Rev Steve Gowland, Margaret Laurie and Mark Orr. They were all towers of strength. Also thanks to Old Methusala (Chris Hampton) who emerged from his ordeal on Thursday to provide a spectacular taxi service for the rest of the weekend which included excursions on demand (to the Forth Bridges and the like) for the Hungarians. Thanks to Raymond Baxter for orbiting and to Mark Condie, Geoff Chandler and Neil Farrell for providing commentaries. Thanks also to the spectators who came and shared with us a truly memorable weekend. 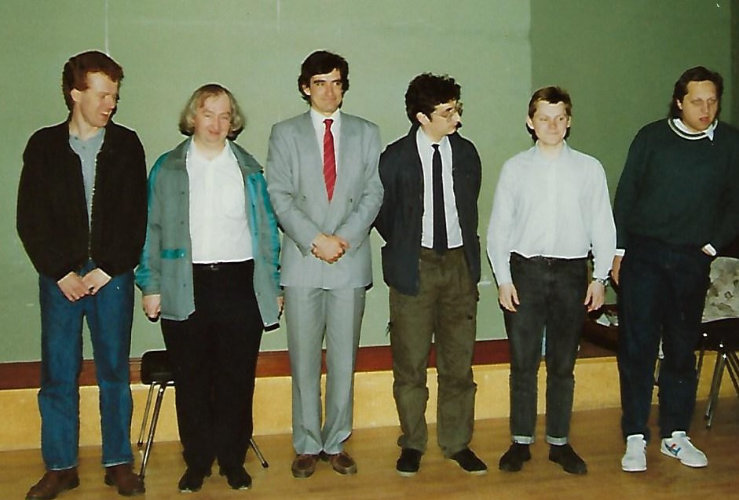 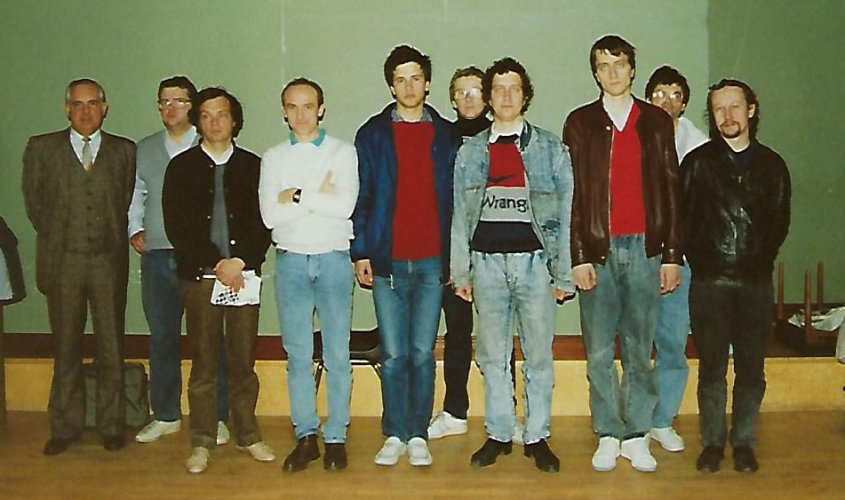 More pictures from the match here.