The match against Corstorphine ended in a hard-fought tie.

We held the grading advantage on all six boards, but it was evident from the start that this was going to be a tough contest. 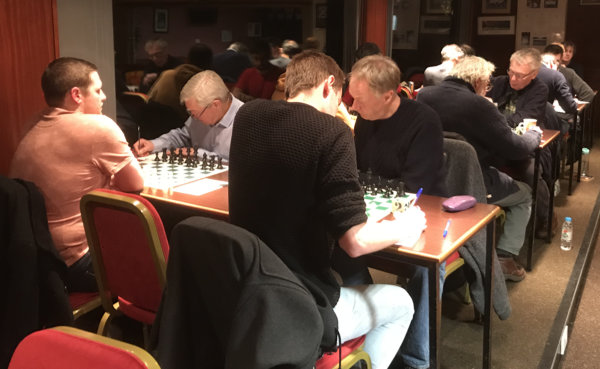 Bill (2nd from left in photo) entered a sharp variation of the Najdorf, with opposite side castling and both sides amassing their forces for an assault on the opponent's king. By move 14, the board was a chaotic mess of hanging pieces from which it appeared Bill was emerging ahead. However, he missed a crucial zwischenzug, which enabled white to save his bishop, giving him two strong bishops against a rook, which proved decisive. Bill sacrificed a rook in the hope of perpetual check, but white's king was able to wriggle out, leaving Bill two pieces down with no attack left. He resigned shortly afterwards.

Michael Jessing was exerting some pressure on the white side of a rare line of the Queen's Gambit Accepted, but Dave Watson was able to solve most of black's problems, ultimately leading to a draw just before the time control.

Lee Bishop's game on board 3 also ended peacefully after a quiet variation of the Slav Defence ultimately simplified into a completely equal bishops-of-same-colour endgame.

Ed McCosh got into trouble after black's clever use of a pin along the semi-open g-file induced g4, leaving a permanently weak pawn on f3, which black was able to round up and capture, leaving Ed with no choice but to relinquish an exchange in order to save his king from a mating attack. After some brief shuffling, it was evident that the resulting endgame held no hope for white to hold on.

On board 2, unnecessarily passive play by black had given Isaac Browning well-placed pieces and a strong attack, culminating in a forced winning of the exchange on move 21. Black played on, sacrificing a bishop in the hope of a perpetual, but it was soon apparent that no such chances existed, leaving white a full rook ahead, and the game concluded shortly afterwards.

This left the match score at 3-2, with all resting on the final game to finish, David Taylor vs Ally Forrester. Fortunately for the Dragons, Ally had fought his way into an endgame with a bishop for a couple of very ordinary-looking pawns. Ally firstly locked the pawns on the kingside, then brought his king over to the queenside, picking off white's pawns one by one, before advancing his own passed pawn to victory.

This brought the overall score to a tie, a result which reflected the well-matched nature of the two teams.